Bottom Fermentation is closely-coupled to bottom-fermenting yeast regardless if homebrewed or not. Without this specific yeast, there would be no process named after it. And with this process, the most dominating parent class of beers was born — the Lager. Lagers handily seized the position of Ales upon its introduction into the market. Beers with appended adjectives like “light” or “lite” are usually part of this revolutionary class.

If you want to know more about bottom fermentation and the beers it has begotten, you can read all about it here before you go and homebrew ’em.

What Does Bottom Fermenting Mean?

Bottom Fermenting refers to a fermentation method that employs bottom-fermenting yeast. The yeast is the kind that collects at the bottom of the fermentation vessel.

This settling characteristic allowed beers to be brewed even in the summer. It enabled the enjoyment of beer in all seasons.

Why Is It Called Bottom Fermentation?

The terminology is nothing more than a description of the raw fact of the process. It stems from the inability of the yeast to form a floating structure, which causes its literal downfall.

It may sound negative but it really is a godsend for beer lovers everywhere — beer-making in any climate.

What Is Bottom Fermented Yeast?

Bottom Fermented Yeast is a pure culture of yeast. This is a yeast that is thought to have evolved from cold Bavarian caves at the time when brewers stored their beers around the Alps.

This yeast works its magic more slowly than the traditional ale yeasts. Consequently, it adapted to the slowdown caused by cold environments

Also, the yeast does not like to clump around as much, hence the tendency to fall down. This trait ultimately earned it the “bottom-fermenting” adjective.

How Does Bottom Fermentation Work?

There is also an optimization approach when it comes to fermentation. Remember that the yeast accumulates at the bottom. While they are at the bottom, their contact with the wort is limited to the top layer of yeast — effectively limiting the number of working yeast. Brewers discovered that the contact area is the key, thus they started using:

Bottom Fermentation was not invented, rather, the Bavarians discovered it in the 1400s. It could possibly have been discovered earlier or by another group.

In 1883, Dr. Emil Christian Hansen was able to isolate the yeast strain Saccharomyces Carlsbergensis. Not surprisingly, the yeast was named after the Carlsberg laboratory from where it was isolated.

When Was Bottom Fermentation Invented?

The first known instance when the Bavarians used the term “Bottom Fermentation” was in 1420. This was during the time when ales were the prevalent type of beer. They probably had some insight into the natural phenomenon.

It is entirely possible that bottom fermentation was done during earlier periods. The ancients probably did not even realize what they had before them. Who knows what level of lost knowledge the archaic brewers in the cold regions of the world had.

What Beer Is Bottom Fermented at Cold Temperatures?

Are All Lagers Bottom Fermented?

All Lager yeasts are from the lineage of Saccharomyces Pastorianus. This fact has been agreed upon by taxonomists — the folks who classify organisms for a living.

Therefore, you cannot claim to have a lager from using another yeast. Chances are your wort would not ferment even if you did force a chilly, bottom-fermentation process. However, who is to say or limit what evolution and bioengineering can — and will — bring.

Is Ale a Bottom Fermented Beer?

Since Ales use top-fermenting yeast, you cannot use it to bottom-ferment simply because it is inclined to float and flocculate.

Nevertheless, some ale strains can undergo lagering after being warm-fermented. Yeast in a beer like an altbier or kölsch evolved to work with lagering even before the golden age of Lagers.

A Stout is a type of ale fermented using top-fermenting yeast. Therefore, it cannot meet the criteria for bottom fermentation.

What Beers Are Made by the Bottom Fermentation Process?

In terms of a quick color indication, pale beers are generally bottom-fermented. But if you are looking for something comprehensive with commercial examples, get a load of these:

For a more comprehensive catalog, check out the Beer Judge Certification Program’s database. 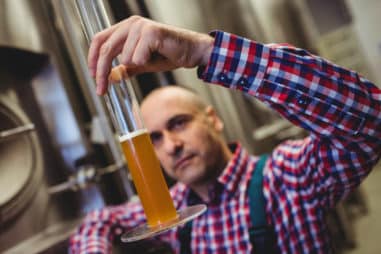