What Does EBC Color Mean for Beer (Calculations, Formulas, and Charts)?

EBC Color speaks about the beer color intended by the artisan brewer. In broad strokes, the artisan is expressing to you the character of the beer through a color name. But EBC color makes a distinction and creates nuance to the message. How red is your “Red” beer against a whole bunch of reds? This is a question an EBC Color value answers for you. You will go through an elaborate flow of measurements and number crunching. For those who scowl at math, charts are available to build your intuition.

Read on to explore EBC Color, without the heavy math, so you can focus on having a beer that looks as good as it tastes!

What Does EBC Measure?

In the context of beers, EBC is a standard of color measurement. You can think of it as how good your brewed beer or the beer you are buying looks.

EBC measures the change in a specific light’s properties before and after it goes through a test liquid. In your case, your favorite beer or homebrew.

How Is EBC Calculated?

If you want to calculate how impressive your brew looks, below is some math.

If you happen to own a spectrophotometer, and you understand the scientific method:

If you have no clue what a spectrophotometer is, here is a little cheat code:

The conversion of EBC to SRM is as easy as doubling your SRM value. The act of doubling is just a rule of thumb though.

If you want to spend some extra brainpower, it is 1.97 times the SRM. The equation is below:

How to Increase EBC in Beer

You can increase the visual appeal of your beers by following some of the following tweaks:

You can check out the Beer Chart below with EBC values and sample beers. Take note that the beers have their individual color ranges and can vary wildly.

What EBC Is Red Beer?

Red Beers in the EBC scale are around the neighborhood of 17 to 36. You can imagine these colors being cranberry, maroon, or sanguine. A cream or tan foam head is a common sight with these beers.

Red IPAs use specialty malts roasted to get the emotional color. And don’t forget the caramelized flavor that goes with the color.

Is EBC the Same as SRM?

EBC is a color measurement method developed by a British Group. This is unlike SRM which was an American Organization’s creation. SRM was also introduced to brewers before EBC.

The EBC color method eventually evolved to match the measurement system of SRM. However, its formula remains similar except for the constant factor of 25.

One curious thing with EBC is the use of different light spectrums for different beer types. These types are either hazy or very dark.

For you to get a grasp on how the scales match up, here is another comparative chart:

Is EBC the Same as Lovibond?

EBC used to be the same as Lovibond in terms of the measurement process. Originally, EBC values were measured using colored glass discs plus the human eye.

Eventually, the British researchers got tired of the problems of the old process. They migrated to the process of using the instrumental method.

What Is the Difference Between EBC and Lovibond?

The Lovibond scale was created long before EBC existed. These standards diverged when EBC decided to adopt certain aspects of the SRM. EBC adopted the use of new technology instead of traditional discs.

The glass discs that EBC used were manufactured by Tintometer. Tintometer was the company Lovibond founded, therefore EBC did not produce its own.

Take a look at this high-level side-by-side presentation:

What Can Go Wrong with Using Instruments?

There are so many ways your readings can go wrong as the process can be very sensitive. Dark beers and cloudy beers require you to make calculation adjustments. If you happen to add some fruit juice to your drink, the color subtleties can get lost in the mix. Also, do not forget to clean your containers since dirt can skew your readings.

On a personal note, buying color measuring instruments will hurt your pocket. You will also need to have some level of expertise in handling said tools. It is therefore recommended that you stick to visual comparison of well-documented beers. Once you have developed the intuition and experience necessary, you can take it to the next level. 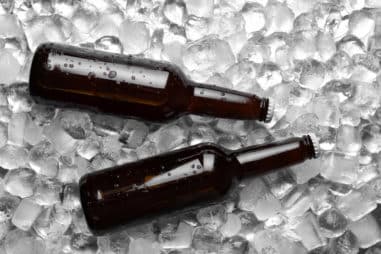